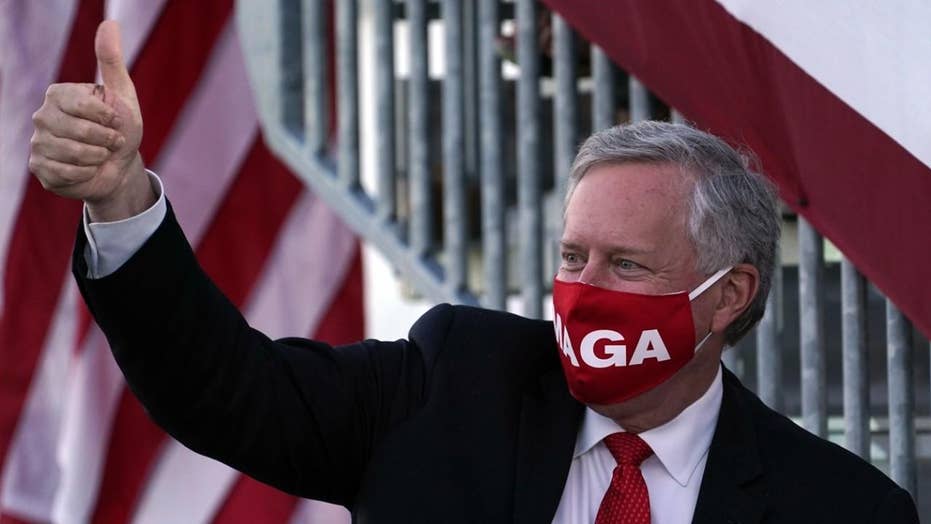 White House chief of staff Mark Meadows says coronavirus stimulus negotiations have entered a 'new phase' within the last 24 hours despite still having a number of issues to work on.

Senate Majority Leader Mitch McConnell urged the White House not to strike a big coronavirus deal before the Nov. 3 election, despite President Trump's public wishes to do so.

The powerful Kentucky Republican expressed his concerns to the Trump administration in the midst of ongoing talks between Treasury Secretary Steven Mnuchin and House Speaker Nancy Pelosi as they try to forge a deal this week that would deliver direct payments, unemployment help and business relief to Americans reeling from the pandemic's economic fallout.

McConnell revealed his advice to the White House during a closed-door lunch with Senate Republicans on Tuesday. The Washington Post first reported the news, and two sources confirmed McConnell's comments to Fox News.

CORONAVIRUS RELIEF TALKS HAVE ENTERED A 'NEW PHASE' AS DEMS, WHITE HOUSE LOOK TO CUT DEAL IN NEXT 48 HOURS: MEADOWS

McConnell is concerned that Pelosi, D-Calif., is not negotiating in good faith with the White House. And if a big deal is struck -- which Trump has said he wants before Nov. 3 -- then voting on the legislation could interfere with the confirmation of Amy Coney Barrett to the Supreme Court.

Senate Republicans also want to avoid any public disputes before Election Day as many conservative senators have grave misgivings about spending another roughly $2 trillion on coronavirus relief, especially as the 2020 fiscal year closed with a $3.1 trillion annual deficit.

Republicans prefer a more "targeted" approach to help struggling Americans and businesses and will try again Wednesday at passing a $500 billion relief package. Democrats are expected to deny the GOP the 60 votes necessary to advance the legislation, as they are holding out for a bipartisan deal between Pelosi and Mnuchin, who is negotiating on behalf of Trump.

To the dismay of fiscal conservatives, Trump in recent days has publically pushed for a huge deal and told "Fox and Friends" on Tuesday that he wants to spend more than Pelosi's $2.2 trillion proposal.

Meanwhile, the White House and Pelosi's team have sent out optimistic signals that a deal could be reached this week.

"I am optimistic," White House chief of staff Mark Meadows said Wednesday. "We do share one goal, and that is hopefully to get some kind of deal in the next 48 hours or so."